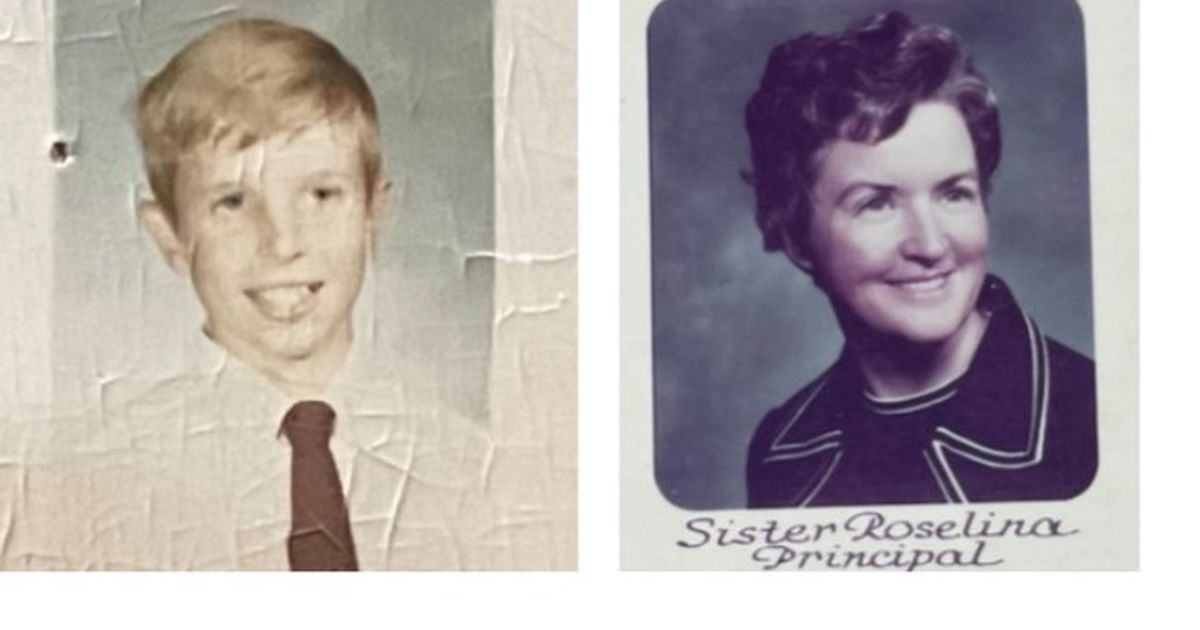 50 years ago, our parish was a microcosm of the times. Is still.

So she slapped me again and immediately phoned my mother, who was a volunteer at the school, to tell her “why did I have to slap Bill”. Mom agreed wholeheartedly that the hierarchy must remain intact. I had more of the same after venturing home.

It was a different time when it came to punishment theory. I should note that years later, my mother often shared my chronicles with Sister Roselina, who appreciated my humor. In fact, she was pretty funny herself, except in front of impudent children.

Ten years ago, I realized why the good sister and her acolytes could be dyspeptic. I visited the vacant convent, as nuns have all but disappeared in America and the parish was renovating to add rooms to the nearby school. Upstairs were many tiny rooms (“cells” as they were called) connected by dark, narrow hallways lined with small metal lockers to hold the nuns’ meager belongings.

I imagined the puzzled thoughts a new young nun might have had after joining the order and moving into such an environment. I became sad at this thought.

But maybe that’s my sensibility today.

The class of 1972 from Christ the King High School (in Chicago) gathers at the church.

The class of 1972 from Christ the King High School (in Chicago) gathers at the church.

On my recent visit, I was guided on a tour of the school by my sister, Ann, who teaches there. We walked into the office for a quick chat with Principal Ann Marie Riordan, who was buzzing with excitement as Christ the King was named National Blue Ribbon School by the US Department of Education. This means that he is a high performer and the accolade is hard to earn. (Only six Georgia schools received the award this year.)

The current director, who is not a nun, was delighted as it gave her and the parish a sigh of relief. The Catholic Archdiocese of Chicago has considered closing or consolidating schools and parishes as church attendance has declined and families no longer have eight, 12 or even 14 children as they do these days. In fact, there was talk that Christ the King might be incorporated into the neighboring – and rival – parish, the larger St. Barnabas.

Closures and consolidations in former Rust Belt cities are the opposite of the trend seen in cities like Atlanta, where new parishes and schools are springing up with a booming population. Former Atlanta Archbishop Wilton Gregory spent a lot of energy closing parishes in his native Chicago before coming here.

The award should give Christ the King the boost it needs to remain its own fiefdom. It’s a comforting thought that a part of your past – as well as your sister’s present – will remain intact.

I was in Chicago for the CK Class of 1972 50th Anniversary Reunion. People are surprised when I tell them I attended an elementary school reunion. But for those of us who grew up there, such an event has more appeal than high school or college reunions. There are few bonds stronger than a shared childhood, having to negotiate one’s place in the world with others. It was sometimes a happy place, sometimes cruel. But it helped forge his path forward, for better or for worse.

About 40 of our class of 80 surviving graduates gathered on Saturday, and many of us attended mass before celebratory drinks. We entered the large, sparse church and were greeted by the pastor, Father Larry Sullivan, who remarked that we were present during a tumultuous time in our country, our city and our neighborhood.

JFK was murdered in kindergarten and Watergate happened when we graduated. In 1968, the Reverend Martin Luther King was assassinated and we were suddenly expelled from school early, and ordered to hurry home, because of the growing riots. Months later came the Democratic Convention, where protesters were beaten by police. Some of my classmates’ fathers were cops, so there were mixed sympathies at the time.

The neighborhood was white and largely Irish and several nearby parishes (as the neighborhoods were called) had recently changed races. There was a siege mentality at the time, with a lot of angst, fear and racism seething. An old friend from class still doesn’t attend meetings because of those old feelings.

The parish is now racially mixed, as is the school, which could have helped win the prestigious Blue Ribbon award. Many people have evolved in their racial feelings, although some of the animosity and anxiety exists, especially as crime and divisive politics dominate the news.

Hopefully the recent class of graduates, the Pandemic Kids, will have an equally cheerful report when they reunite in 2072.

Lung Ultrasound vs Chest CT for Diagnosis of COVID-19 Pneumonia